Home » Uncategorized » We did it!

Well, we did it! We finally finished our transatlantic crossing! Before I get into that, let me fill you in on a bit of what we’ve been doing.

We left Ponta Delgada for our requisite 90 day sejour from the EU in February. One might question our returning to Canada in the middle of winter, but we had no choice. The three months in Canada allowed us to have our annual medical and dental appointments, some skiing, a trip to Mexico and the big news……..we are now officially Portuguese residents. Don’t ask me how because it is a long and convoluted process, but thanks to Larry’s perseverance and patience, we managed to obtain our residency. So now we no longer have to leave the EU for 90 days, every 90 days and we can stay in the EU for up to 5 years!

Larry flew back to the Azores 19 May; I stayed behind for a month for a few more medical appointment. I arrived back in Ponta Delgada on 13 June; we began preparing the boat for the next part of our adventure: the final leg to mainland Portugal. After spending the winter in Ponta Delgada and it’s less than favourable conditions, we were anxious to get moving and start experiencing something new.

With awesome winds and weather forecasted, We left Ponta Delgada, Sao Miguel, in the Azores on Wednesday 27 June and arrived in Lagos, Portugal 6 days and two hours later (but whose counting ). We covered 850 nautical miles, averaging 140 NMs per day. Winds were consistent from the north to northeast anywhere from 15 to 20 kts. We managed to complete the journey with two reefs in the mainsail and used the stay sail. 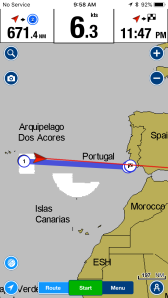 Sao Miguel behind us

The trip was thankfully, pretty uneventful, other than a big wave we took on the beam one night while we were sleeping. Not much freighter traffic, combined with our trusty autohelm and Automatic Identification System, we were both able to get some good sleep at night. We only did shifts the last night; thank god for that! I have trouble staying awake at night, but I had downloaded some trashing tv shows that kept me awake and passed time quickly. I was on shift from 11pm to 3 am. Just as I started my watch, we were approaching the shipping lanes. Of course, the moment larry put his head down the freighters were coming out of nowhere.

On the AIS, we are the blue arrow and the orange arrows are the freighters:

We are the blue arrow; orange arrows are freighters

I was quite leery at first wondering how my tender tummy would handle the seas, but we both took the british version of seasick meds (sturgeron) and I topped myself up with the odd gravol here and there, just for good measure. Neither one us experienced an ounce of sea sickness. For the first couple of days I limit my food intake, just in case and Larry did all the cooking. As per the initial crossing from Nova Scotia, I pre-cooked meat and froze it in our trusty. “Engel” cooler. So all that was required was thawing meat, opening a can of something or other and adding rice or pasta and there you go! A great one pot meal.

I should mention our battery bank (4 AGM Trojans) kept topped up with just our wind generator. We would typically run the engine every couple of days to help charge the batteries, but even with the autohelm and fridge going, the batteries maintained great charge.

The Skipper having a nap. I took this pic from the window of my bunk. 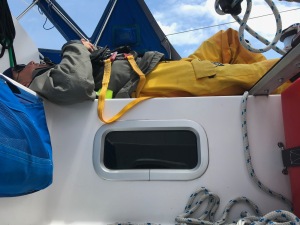 Larry changed our Canadian Flag in celebration of canada day: 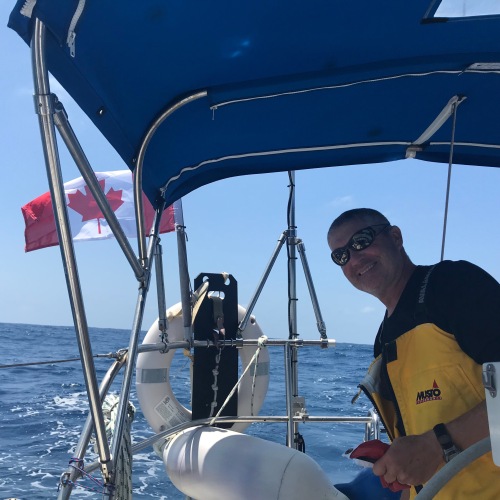 And I changed my clothes!

There are huge differences between Lagos and Ponta Delgada; the first being the price. In PD we paid €3 per day and here in Lagos it is approx €33 per day, but at least the marina is a little hurricane hole and the showers are consistently hot. Oh and beer/wine more expensive here too. Other than the beaches here in Lagos, there isn’t much to see or do. PD and the Azores has a lot more things to “see and do”. But that’s okay – we are enjoying the fact that we’ve made it across the Atlantic. We will be spending the winter here so will have lots of time to tour and see what is around us. We are surprised not seeing another canadian boat in the marina. We’ve only come across two other canadian boats since we started our trip. We thought there would be more. Our plan this summer is to port hop along the coast and into Gibraltar and Spain, then head back this way for the winter.