We finally crashed at 2:30 in the morning, which we learned later was actually 5:30 in the morning. Funny thing we’ve discovered since arriving is that the sun doesn’t really come up til 8 in the morning. Must be something to do with the axis and curvature of the earth/sun, something. I kept on being woken up by this blasted bloody dog barking every couple of hours. We passed the same dog sleeping on huge german catamaran, but at 1:30 in the morning, it must have been too much effort for him to bark. Only in the early morning, every hour or so, he’d go on a terror. I was so annoyed I decided to get up. I could hear water running and went out to take a look at our surroundings. There was Sarah washing clothes. They arrived a couple of days before us. She told me that they were also caught in that storm, but one of their windows was’t holding any of the water out. She said everything was soaked and full of salt, she had to essentially wash it all. I felt guilty since everything we owned was bone dry. They hit the storm of day 6 of their journey, so were soaked for 11 days! I would have wanted to commit suicide!! 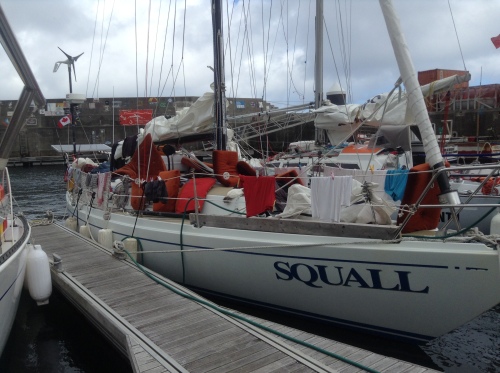 There are only about 12 slips in this harbour. Typically it is the first stop for boats coming from North Amercia or from Bermuda. A lot of vessels just bypass Flores and go straight for Horta – it depends which way they are coming from. For us coming from the north west, Flores is a good first stop. There isn’t much here, but there are 2 grocery stores, a bank, a few restaurants and apparently a post office. But it is super quaint and very pretty; only the odd tourist make their way here to Flores.

So the pilot books say not to enter Flores under dark. I can see why. There are rocks, although charted, my cringe factor was definitely elevated when I saw them in daylight. The entrance into the harbour is quite tight and apparently if there is an east wind, you can’t stay in the harbour. Not sure where they would expect boats to go!

Our first order of business was checking in with customs. Typically things are open from 9 – 5 but closed from noon to one or noon to 3 or one to two – it varies, but pretty much everything shuts down during the day for a period. And most everything is closed on Sundays, including restaurants. We went over to the Harbour office to check in and then walked up (and I mean up) to the grocery store. Being a volcanic island, everything is uphill from the harbour. With no exercise since we left Sydney, I often had to stop on the walk and catch my breath. Thought I was going to have a heart attack! Flores is a very sleepy town with not much happening, but you can get fuel, and provisions. The dock comes with power and water, all for 12€; we didn’t use the showers since we were told they were cold, so often had showers at the end of the dock. We were hot and sweating absolutely all the time.

Right at the harbour there is a little restaurant/bar. It has spectacular views, but the food isn’t very good. I didn’t feel like cooking the first night so we went up to the restaurant. Beer is super cheap at 2.50 € for a large. We ended up ordering a “steak”. Pretty much everything here comes with a fried egg on top; not sure what that is all about, but it was the best part of that meal. After that night, we made all our meals on the boat.

That night we met a guy (Neil) who was on his way home after doing the OSTAR race. You know the one where 3 boats had to be rescued by the Queen Mary? Well he actually completed the race and was now waiting in Flores for a part to arrive for his boat.

On Saturday night, all our dreams came crashing down. During a conversation with Numa and Sarah (the couple from Squall), we learned that everything we thought we knew about EU immigration actually was actually wrong. So the rule is you can stay in the EU for a total of 90 days, within a 180 day period. They you are required to leave the EU for another 90 days before you can return. We thought no sweat, we will go to Gibraltar and stay there. Turns out, Gilbraltar is also part of the EU. We had many sleepless nights after that, wondering what to do. We had rented out our condo for 2 years! Where were we going to live? Since coming to the Azores, we have found out there are all kinds of different rules and regulations and everyone has a different story. Customs told us that we can get a 90 day extension for Portugal and then we can possibly get extensions in countries belonging to the Schengen agreement. Initially larry wanted to go back to ottawa, which would involve evicting our tenant; I wasn’t prepared to do that. So for now when we hit the mainland (you can only apply for an extension in the area you’re planning on staying) we will go to customs and attempt to get some definite answers. At one point we even thought of going to Morocco. So I think we have some options and we will eventually sort it out.

We were planning on leaving Flores on the 21st. We were feeling a little depressed. The tradition, especially in Horta, is to paint the marina breakwater. So it was actually around 7 pm I said to larry, lets go paint the wall. All we had was a foam brush and tremclad paint, so my attempt isn’t that great, but we did it! 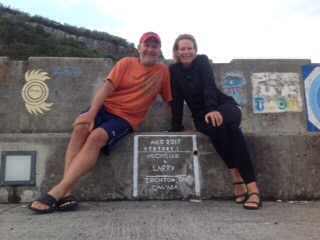 Here is the walkway from the restaurant down to the beach. Man that water was cold!